On September 30, Saluda got a new park, a one-acre lot next to the Saluda School playground.

The new park was named the Little Park, after the man who had owned the one-acre lot adjoining the Saluda School playground for the past 84 years.

George Robert Little III (known as Bobby to his friends) was born in 1916, the only child of Dr. George and Eleanor Little. His father owned the Princess Theater and Littles Pharmacy in Saluda, and was the bank president and mayor of the town, too.

Little grew up in Saluda, went to Saluda School, became an Eagle Scout, and kept busy camping, delivering newspapers, cleaning and building morning fires for the Sunday worship services at two local churches to get a little spending money, and working at the soda fountain of his dads drug store.

It all ended when Littles father died when he was 17 years old, and his mother died the next year.

With no family left, Little moved to Asheville to work for the newspaper. Then he moved to Spartanburg, joined the army to fight in WWII, married a Spartanburg girl named Mildred Groce in 1944 and had two daughters. For the next 55+ years he made a life for himself and his family in Spartanburg.

Although Little never lived in Saluda again, he often spoke of his time there and the beautiful land and great people. He came back to class reunions and to visit old friends, the last visit being to Robert Paces store shortly before his death in 2003. Now Robert Pace is gone, too.

A representative from the Saluda Safe Routes to School committee called Littles widow, Mildred, to ask if she would be willing to let the school create a greenway through her lot, connected to the playground. Mildred said that she was thinking of selling the lot since her husband was gone and the family had no need for the lot.

At that point, the community came together and made things happen. Saluda School had used the lot for a nature walk years ago, with the Little familys permission, so it was a no brainer that Saluda School would participate in cleaning up the lot and making it into a nature study area.

Polk County Community Foundation came up with the funds for Saluda Community Land Trust (SCLT) to buy the lot at a bargain sale price. Most of the lots true value was donated to the SCLT by the Little family. The deed states that the park will be for use by Saluda School during school hours and open to the public at all other times. It will be named the George Robert Little III Park. If it ever ceases to be used as a public park, the land will revert back to the Little family.

So, how many people did it take to give Saluda a new Little Park? A communitys worth, say those involved in the park’s creation.

They point out that the community includes Saluda folks from years past who gave Bobby Little a wonderful childhood, a wife and two daughters who loved him, an appraiser who donated his services to make the bargain sale possible, the Polk County Community Foundation, SCLT, Saluda School, and a whole bunch of volunteers who will turn a vacant lot into a lovely little park for the benefit of all. 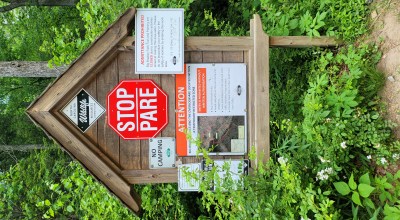